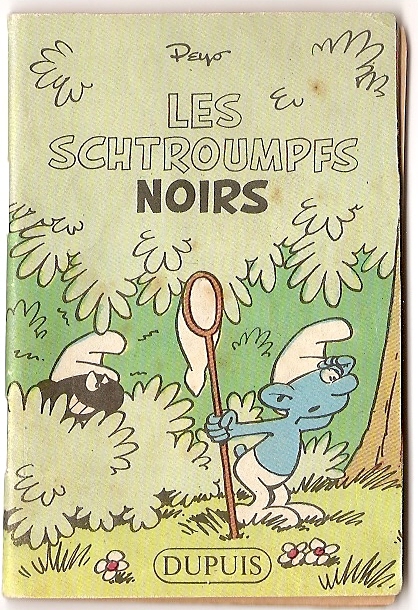 Shortly after debutting as side-characters in an adventure of 'Johan et Pirlouit' serialized in the Belgian comics magazine Spirou in 1958, the Smurfs had their own first adventure in a pocket-sized supplement (mini-récit) of Spirou no. 1107, dated July 2nd, 1959. Titled as Les Schtroumpfs noirs [The Black Smurfs], this adventure was scripted by Yvon Delporte who was Spirou's editor-in-chief at the time; over the years, Delporte would contribute more scripts to the Smurfs.﻿ 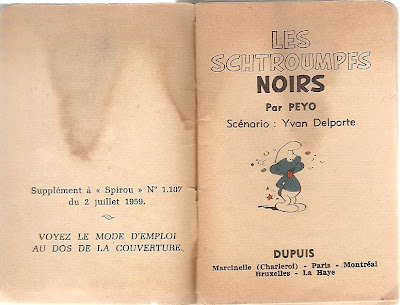 Les Schtroumpfs noirs start with a reminder that the Smurfs are "the small inhabitants of the Cursed Land'" which Johan and Pirlouit had met in the adventure 'La Flûte à six schtroumpfs' (note that the said adventure is already being referred as ".. six schtroumpfs" rather than ".. six trous" as it was originally titled). The visual depiction of the smurfs' village is in line with the depiction in the earlier 'Johan et Pirlouit' adventure, that is located in a bleak terrain: 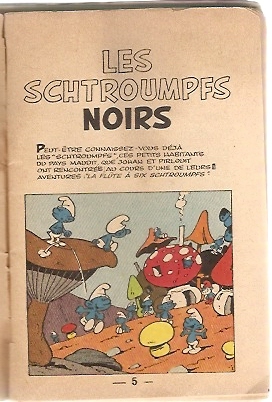 A smurf is bitten in his tail by a black fly and turns into a menacing black smurf: 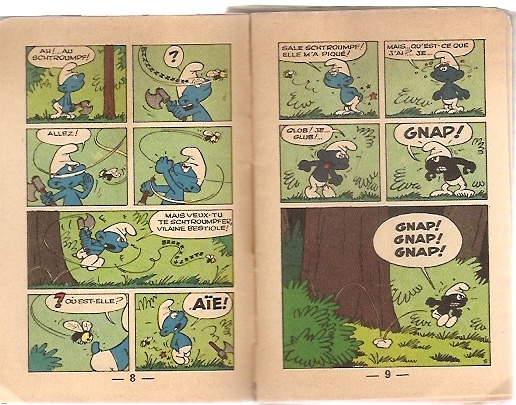 We get to see the interior of Papa Smurf's cabin for the first time as he begins work to try to find an antidote: 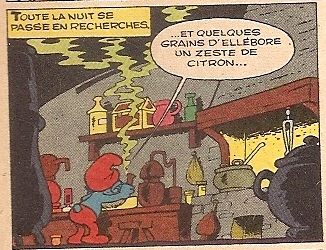 Meanwhile, the black plague spreads among the smurfs: 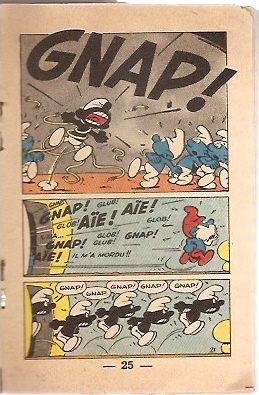 Just as Pape Smurf finds an antidote in the form of a powder, the growing band of the black smurfs attack the village and a battle ensues: 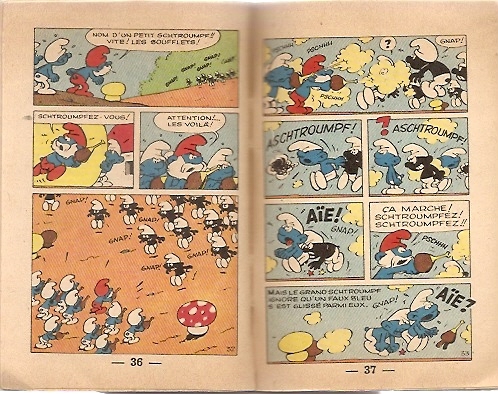 Papa Smurf himself is bitten by a black smurf who had painted himself blue as a disguise. Luckily, an accidental explosion in his cabin, which, by the way, enables the readers to see that he is bald under his hood!, disperses the antidote powder into the air... 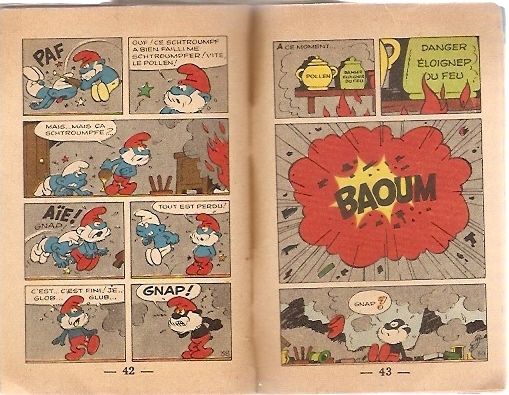 ... eliminating the plague and hence bringing forth a happy end: 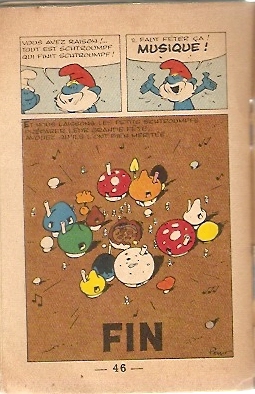 Note that the smurf village, seen from an aerial perspective for the first time, is rather small with less than a dozen mushroom houses as depicted in this early stage﻿ of the evolution of the smurfs comics. Also, it is still only the Papa Smurf who is presented with a distinct identity in the smurf community. However, the first smurf which was bitten by the black fly was portrayed as lazy as well as somewhat grumpy prior to being sent by Papa Smurf to the forest to cut down down some wood, so he can be seen as the first forerunner of the personalization of individal smurfs.
Overall, Les Schtroumpfs noirs is a great little comics. It is fast-paced, very dynamic. The black smurfs are an uncanny menace, not only by their outer look, but also by the fact that they bite their counterparts in their tails at the back. Freud might have seen some hint of homophopia at work here, in the faint resemblance of this violent act to anal rape.. On the other hand, in the post-war continental European consciousness, black was associated with fascism due to the Italian 'blackshirts', paramilitary fascist thugs, of the Mussolini era and a political connotation might also be seen.
In 1963, Peyo would redraw Les Schtroumpfs noirs for an album edition; a comparison of the mini-récit and the album versions will be posted in thisblog in due course.
'Les Schtroumpfs noirs' is also one of the episodes of a relatively obscure black & white Belgian television animated series from circa early 1960s. When the Smurfs were made into an American television series in 1981, the episode based on Les Schtroumpfs noirs would feature purple, rather than black, smurfs, apparently not to scare American kids too much...
Posted by Kaya Özkaracalar at 06:34